December Is The Time To Buy!

December Is The Time To Buy!

This chart below reminds us that the balance of power between buyers and sellers (especially of listings that came on in October or earlier) shifts during the holiday season, and the SP-OP drops dramatically for sales negotiated during that period.

This is a good period to negotiate better deals for those buyers who stay in the game, take second looks at listings with lengthening days-on-market, back on markets, and consider listings that have been withdrawn for the holidays.

Of the 476 currently Active listings, 228 have been on the market for 48 days or longer: you just know that the sellers and listing agents are getting worried. In the last 3 weeks, another 94 listings have expired or been withdrawn from the market – and presumably, those sellers still want to sell as well. 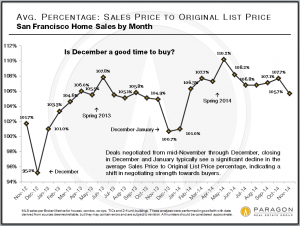 One comment on “December Is The Time To Buy!”