While the nation as a whole saw a tiny decrease in the S&P Case-Shiller Home Price index in the January report released today, the San Francisco Metro Area Index (for 5 northern counties) bumped up again. The C-S Index for higher priced houses has now completely re-attained the previous market peak set in 2006, as measured by January data points. The city of San Francisco itself has exceeded the rise in the 5-county area and has generally surpassed previous peak values – many SF neighborhoods by substantial margins.

Based upon what we are seeing on the ground, we expect to see further increases once the late winter/early spring selling season is reflected in the Index. 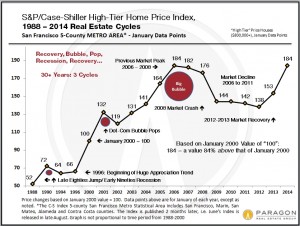