September is almost always the month with the largest number of new home listings in San Francisco: The number of new listings hitting the market in September 2014 was 15% higher than the #2 month (May 2014) over the past 21 months. [See chart below] Because Labor Day is so late this year, September only has 3 weeks of selling days after the holiday weekend, and if this is a big listing month – it looks like it might well be – we may find a whole lot of listings crammed into those 3 weeks. Usually, the 5 weeks after Labor Day feed the activity of the entire autumn sales season in SF.

[In Marin and the Wine Country, September is usually not the biggest month for new listings. In Marin, September typically falls a bit below the big spring months; in the Wine Country, the big listing season runs from early spring to mid-summer, and listings usually fall in September from August’s numbers and continue to gradually fall further through the end of the year.]

Because of the financial markets recent volatility, it’s possible that some significant percentage of buyers will be warier and hold off until there is more clarity. [This happened a couple years back with the national debt reauthorization standoff in late September/early October.] Media hysteria is not helping, and a raise in interest rates would probably trigger more volatility – at this point, someone stepping on a cat’s tail in Shanghai will probably trigger more volatility.

On the other hand, the Fed might announce (at any time) that no interest raise will occur (or minimize the scale of an increase), there might be a sustained market recovery this week, and last week’s craziness will quickly fade into insignificance.

It’s hard to forecast how the autumn selling season will start this year, especially compared to the utter frenzy of last spring. I don’t know if it makes sense to prepare your sellers for possible alternative scenarios in buyer reaction, but it may be something for you to think about. 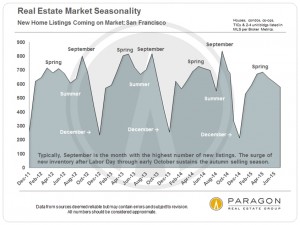